Posts
You are here: Home / Posts / News / The Duchess, The Head Gardener and the creation of Alnwick Garden –...

The Head Gardener of Alnwick Garden travelled to Burley in Wharfedale last Friday to give an illustrated talk.  I didn’t feel like venturing out.  But I’m glad I did.  We’d had heavy snow that morning and although all melted by the evening the weather was wet and windy. I would have been equally happy stopping at home, in Ilkley.

But how lucky the audience were to receive such a talk from Trevor Jones who had to drive back to Alnwick afterwards late that evening. (I understand he had to be present at Alnwick Garden for some early morning filming the next day, so had to get back).

So how did Trevor Jones come by to make this trip from Alnwick to Wharfedale?

Trevor knows Geoff and Jackie Whiteley from STRULCH. A company based in Burley in Wharfedale which has developed a straw based mulch.

Alnwick Garden uses STRULCH in their ornamental garden. As well as having the benefits of other organic mulches, this product turns out to significantly reduce the impact of slugs. Trevor and his team use it around Hostas and Delphiniums, plants which are notoriously attractive to slugs and are typically decimated by them. Not so at Alnwick, we heard.  Visitors often asking what is their secret!

The development of Alnwick gardens is not yet complete. There are still a couple of phases to implement. It was intriguing to here that the Duchess of Northumberland had approached Jacques and Peter Wirtz from Belgium to come up with a design for the gardens. Designers who I admire for the simplicity and structure in their designs. I was surprised to hear that the Duchess had previously approached UK designers but none had been able to crystallise her vision.

Children are encouraged to explore and immerse themselves in the garden, with various activities, structures and edible planting for them to enjoy. 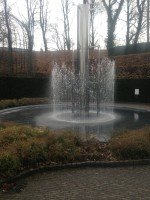 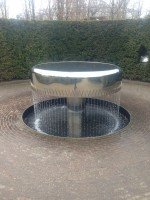 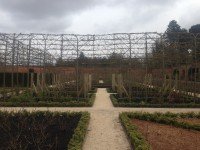 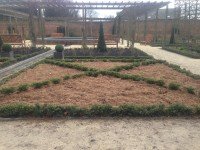 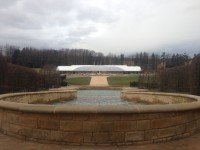 By the end of the talk I was convinced that this is a place where horticulture and landscape design is truly valued. Considerable investment has been made to create a public garden for various generations to enjoy and to appreciate the outdoors. It restores faith in the horticulture profession, one that typically doesn’t pay well but one which can have such a positive impact.

I’ve not been to Alnwick for a couple of years. They have various enticing events throughout the year. The talk has reminded me what a delight it is and I must take my boys again soon.

Former Lord Mayor Cllr Dale Smith sponsored the event in Burley in Wharfedale in aid of this year’s Lord Mayor’s Appeal. Money raised will go towards The Bradford Hospital Children’s Charity and the Spread a Smile Charity.

How and why Sue needed help – April 2016
UPDATE: WAITING LIST
DESIGN COMMISSIONS - 4 MONTH WAITING LIST Please get in touch if you would like to plan ahead. ONE OFF CONSULTATIONS ALLOW 4-8 weeks
See my portfolio by clicking here...
X
Scroll to top